Home/On Misc. Stuff ("What's he on anyway?")/Seriously, humor is important.
Previous Next

I have a tendency to joke. Anyone who knows me may be overheard fortifying said claim with such mutterings as, “You’re so silly” or, when I’ve drifted to the safe corner of the room, a whisper to a family member could include, “I wish he’d leave,” or “He’s probably a soulless heathen. And, the more I think about, I wish he’d leave.” 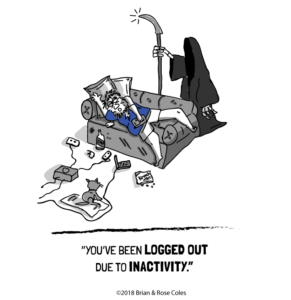 Yet one of those tingz I think about is why humor is important. Why it is not just “silliness” and a “waste of time,” like the final season of “Northern Exposure” or snow globes.

There is a minimum of three reasons humor is critical to a happy and relatively good life (not the board game or cereal).

Bikini bottom line? It helps us focus on the things that matter! When one has the limited neurological capability like the author of this post, it does wonders to open up a bit’o space in that cramped studio apartment that is the skull.

Of course, humor has its place and then, at times it does not (or so I am told). Some people have limits and that’s their prerogative. Though for humorists, almost any time is kosher among friends. Upon the early demise of National Lampoon co-founder Doug Kenney, who, in 1980, was found dead, having plummeted some 30 feet off a cliff in Hawaii, lodging between two rocks, colleague Harold Ramis is to have said, “Probably fell while he was looking for a place to jump.”

Still, for most people, humor is a great way to deal with challenges, smooth over disagreements and god or no god willing, not take every darn thing about ourselves so seriously. Life is too short to be so short-tempered.

I really hold dear the certitude that laughter is the oxygen of life – the allegorical iron lung in this giant bowl of Life cereal we find ourselves dog paddling around in, gnawing on each other until massive, fatal lactose intolerance sets in and we pass away with that look on our face. You know, the one your mother  was referring to when she said “your face will stay that way if you keep making it.”

Live. Love. Laugh. It’s not just a cork-board sign you find on clearance on the end cap at Target. It’s also at the end of this post.